We’re all in this together – or are we? What is your role?

Connie Nell has a PhD in Social Anthropology and has worked on several theatre projects and in the education sector. In 2018 she was an An Taisce Climate Ambassador and co-founded Sligo Environmental Network. These voluntary activities have led to her running participatory community projects and 'Active Hope' workshops. Connie never turns down an SDG challenge!

I’m a social anthropologist. Everything I do in my life revolves around people. Anthropology is about seeing the complexity of people’s lives and of the problems in our society. Seeing things from their point of view. Understanding how people negotiate their being in society.
Trying to understand it.

For my PhD, I did fieldwork in a beautiful small Andean community in Bolivia called Cabreca. In Cabreca there is no electricity and the community has no road access. People are always walking, running, working the land, trotting from one engagement to the next. Those who became my hosts for over a year didn’t know what anthropology was, nor had they come across the concept of a university or research. When I first tried to gather some data on my abstract and rather philosophical research question, I failed. Cabrequeños didn’t want to talk to me about what it was like to live in an in-between space between the highlands and the valleys. Instead, they showed me how to live in their community by letting me be one of them and getting me to do the things that they do. I wrote about ‘the anthropologist as a child’ because the children in Cabreca also learn how to be a person in the community through their participation in all community activities. A two-year-old girl peeling potatoes with a big knife and getting better at it every time. A five-year-old boy herding cattle… 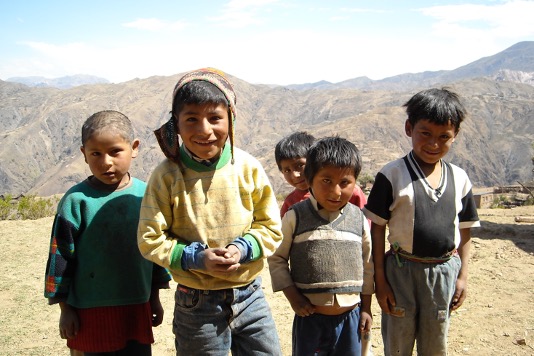 Caption: Cabreca children
Names: Tibu, Mario, Jesús, Zaca, Teofilo.
Informed consent was given for research to be done including taking photographs and audio recordings.
That particular picture was taken in 2008 so who knows what these young men are up to now!


When I returned to Europe, I was struggling. Struggling with my physical being in the very different environments, in traffic, in crowded rooms with heating systems. I had to get used to all this again after practically living outdoors at an altitude of almost 3000m. But there were also the people around me: people who were picking and choosing from the supermarket shelves, apparently taking everything for granted, not wasting any time thinking about where the products had come from. People treating children as some sort of different entity, belittling them, fussing over them, putting them into institutions where they are supposed to learn removed from all context, sitting still at a desk all day. People who don’t share and don’t live community. And people who don’t respect Pachamama – Mother Earth, who have often lost all connection to Pachamama.
After about a year and a half, I was beginning to fit in again. But there were certain things that I didn’t want to ignore or accept any more. And living my own life in a slightly more conscious way wasn’t enough anymore. I wanted to tell people around me to wake up and take a good look at the world around us. My journey of activism began: In 2018 I was a Climate Ambassador with An Taisce. The program allowed me to network with some amazing people around the country and it allowed me to step up and say: “I’m going to make a contribution. I’m becoming part of something.” I wasn’t alone anymore. The same year I co-founded Sligo Environmental Network. And a lot has happened since. Meeting like-minded people, being able to have conversations around climate change, biodiversity loss, intersectionality and justice has been great and had a huge positive impact on my mental wellbeing. I, as an individual, and we, as a community group, got to the stage where we were feeling better about having found allies and raising awareness of the issues that we thought needed attention. But we were only talking, we weren’t doing anything! So how do you enter the next stage: getting active? When you’re part of a good network, opportunities to get active arise. But sometimes those opportunities really don’t suit my personality, no matter how much stepping out of my comfort zone is recommended. And sometimes I just can’t see the point of a suggested action. Sometimes I feel I lack the expertise of an environmental scientist or political activist to join in. So sometimes I stay away. But we don’t have to go far or even pretend to be someone else to become active in our own lives. I am not an environmental scientist. I am an anthropologist. I have also worked in theatre and in education. So what can my own personal response to crisis be? The crises around us affect us all. And we can all respond in different ways to make unique contributions. If I put my own passions and interests together and use them to communicate the crisis, will I not be a lot more passionate and authentic about that communication? And not only are anthropology and the arts what I’m passionate about, they’re also what I’m good at, qualified, and experienced in!
Another thing I was thinking about a lot when I had found a circle of like-minded people, was the phenomenon of sitting in a bubble, talking to people who have a similar background, similar interests, similar stories to my own. My Twitter account had become an echo chamber and so had much of my social life. It gave us momentum because the movement was growing, we were growing. But weren’t we blending out all other opinions and stories? Weren’t we actually tiny and minuscule?
These considerations can lead to frustration and paralysis. Fortunately, rather than feeling too small to make a difference, I took those thoughts on board and created something which was extremely rewarding for me but, according to the feedback, also empowered people who I invited to be part of my projects.

In the summer of 2019, I invited people over 65 to conversations around their childhood memories and in particular on how their perception of the environment has changed. I audio-recorded these conversations and developed a script from verbatim materials. A performance of readings and audio clips came out of this and ‘Sligo Climate Wisdom’ was performed in Sligo Courthouse for Culture Night 2019. When I figured that one of the big school strikes was on the same morning, I got in touch with some secondary students who were part of our network and asked them if we could borrow their placards for the evening. And so the performance in one of the old courtrooms was enhanced by an exhibition in the foyer of the gorgeous Courthouse.


The feedback from both the audience and participants was great. People found themselves and their own memories in the stories told. And several people encouraged us to take it further and to enable a conversation between the generations. The follow-up project ‘Sligo Climate Generations’ was born. I invited older participants and teenagers to join a participatory arts project. Covid got in the way. Rather than moving the planned workshops with all participants online, the project was re-designed. Sadly, the participants still haven’t met face-to-face. However, they got creative and my task as a facilitator and coordinator is an easy one: I encourage them to use their own passions, skills, and experience. The teenagers decided to write a letter each to the older people and have received replies. The letters are beautiful, and some include poetry, paintings, lino prints, reading recommendations etc. At the moment the young people are preparing zines that will be sent out to the older people. We’re hoping to capture their reactions in short video recordings to have a short film at the end. The ideas appear as we’re going along, the process is dynamic and interactive.
The idea of community development as a participatory process where people, who wouldn’t meet otherwise, enter into dialogue has been very well received. Inspired by the young people’s strong feelings about social justice issues, my latest project will begin soon: ‘Sligo Climate Justice’ is a participatory project for migrants who will meet local people from Sligo.

What is your role? Looking back at some of the amazing projects that SDG Advocates have organised, you’ll find that they, too, are putting their passions and their interests as well as their skills into these projects. And they are using their networks and their communities to get active. Use your networks (and if you feel you don’t have any yet, go out and find them!), get different perspectives on board, and practice your critical thinking skills. Your very own, unique activism will come out of it and have an impact on the people around you.

A note on funding: there are a lot of opportunities out there that are not explicitly linked to environmental activism or to arts. Being part of a community group has enabled me to get funding through grants directed towards advocacy for older people and towards community integration. Not only does the environmental crisis now get attention in many different kinds of funding proposals but also the mental health benefits of participatory projects are a good selling point in a time where people everywhere in the world are suffering from the impact of a pandemic… I use the SDGs (+ specific targets!) to describe the value of my projects.

Interesting to read about the context, the development and moving into action. Thank you for this story and continued success to you

Thanks for this reference, Salinda! Must revisit Apffel-Marglin...

A great read Connie - thank you for sharing

Thank you, Olivia! You know where to find your amazing self in the text... When will I see you again? Mayo Sligo cross-border participation project? Love the "canvas"!

Hiya..an inspiring read from a great lady..i too say the same..every little small action will help and will become fulfilling just to know u are doing something and taking alead role..we have a blank canvas at the moment with climate change..the canvas is yours..you can make a start and create masterpieces or take your time and take small steps first..its all up to you..for christmas just think about buying local..it will give all our small local businesses alift..and for spring think about planting something..ahead of lettuce is a great start..you'l savour the taste when eating it and then think of your canvas..look what you have created and saved by this little small act Keep up the good work connie..olivia